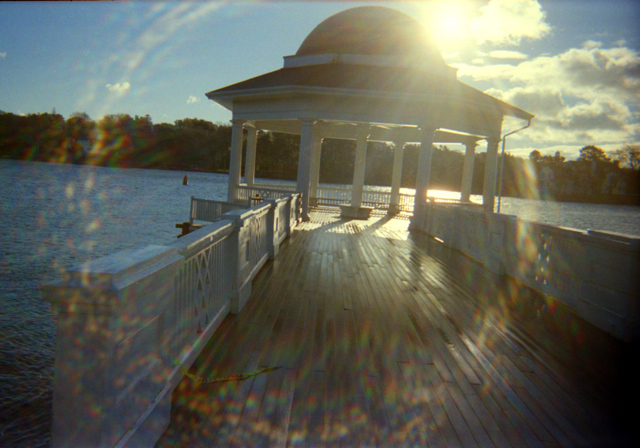 Originally published in the ASA Sociology of Religion Section Newsletter from November 2009.

The gazebo at Wellington Cove (above) immediately caught my attention as I shuffled through an intervieweeʼs pictures. I was struck by the way the sunlight illuminated the gazebo and gave the image a curious, almost otherworldly appearance. The perspective drew me down the boardwalk of a familiar place near where I live. In the summer I like to take my children there to play, to collect shells, and to study the sea creatures that make their homes among the gazeboʼs pilings. For me the image evoked memories of family, adventure, and discovery. But this was not my picture. Even though I knew this place, I had never seen it quite this way before. It looked deserted, quiet, cold, and mysterious to me. I wondered why the subject photographed the gazebo for our study and looked forward to learning what the story behind it might reveal about lived religion.

As a co-investigator on the Spiritual Narratives in Everyday Life project (Nancy Ammerman, Principal Investigator), I became accustomed to the interval between my first reading of the pictures our subjects took and the stories they eventually told me about each image. Our study included a straightforward procedure: give each subject a 27-exposure, disposable camera with instructions to take photos of the places, possessions, and activities that are most important to them. We then used the developed pictures in an interview in which participants were invited to tell the story behind each photo. As conversations unfolded, interviewers probed for the presence (or absence) of religion and spirituality. Although some of our 95 subjects did not participate in this exercise, 80 people snapped over 1300 photographs. This method of photo elicitation interviewing (cf. Clark-Ibáñez 2004; Harper 2002) generated valuable insights into religion in everyday
life.

The photo above, for example, was taken by Grace Shoemaker, a retired healthcare professional who lives near the Massachusetts coast. She describes herself as a spiritual, but “not religious” Episcopalian who practices Reiki and meets with a group of women to interpret dreams (monthly) more frequently than she attends church (once or twice a year). Grace told me the story behind her gazebo photograph.

I like to go there and sit when itʼs quiet, and when Iʼm at the water, thatʼs when I pray and I talk to God and um, itʼs a quiet place usually. In the summer, itʼs not that quiet but other times of year it is, and Iʼve been there when [there] were weddings, and itʼs just gorgeous to see the, you know, the families all together and the bride walking down. And I brought the kids there, my grandkids, and I often wonder who built it and why, and why that shape and Iʼm always curious what goes through peopleʼs minds when they do that kind of thing.

Practices such as talking to God, experiences like observing weddings, memories of playing with children, and the gazeboʼs proximity to water work together to make this a meaningful place for Grace. As our conversation progressed, however, I became aware that there was more to it than that.

After telling me about the gazebo, Grace pointed to the aura and remarked, “I like this, the way this picture came out with the light around it.” I prompted her to tell me more about the ring of light. “Oh, oh, [itʼs] a bunch of guardian angels or God or I donʼt [know], just that spirit thatʼs there. Thereʼs a spirit thatʼs there,” Grace explained. “So it wasnʼt just the camera?” I probed. “No, I donʼt think so,” she continued. “No, I think thereʼs more to it than that. Itʼs so pretty. I mean and maybe it was just the camera, but I think things happen for a reason. I really do, I just, I mean so many times in my life something, you know, like that, where you can give it a good reason why, but thereʼs more to it than that. It makes it special.” Indeed, there is something special about this photo: the story and conversation it evoked helped to uncover how religion and spirituality inform Graceʼs understanding of how the world works.

Through their photos, interviewees took us places we may not have gone, much less imagined. Inviting participants into the research process by letting them decide what to photograph stimulated collaboration and built rapport, thereby transforming the researcher-subject relationship in very productive ways (cf. Clark 1999; Clark-Ibáñez 2007). This exercise allowed us to “see” the social world, if you donʼt mind a another play on words, through the lenses of participants. Overall, the benefits of this inexpensive procedure outweigh its logistical demands and any extra effort that may be needed to satisfy the concerns of an IRB. And, after using this method on two projects (Spiritual Narratives and my dissertation, “Godʼs Global Professionals”), I agree with Douglas Harperʼs assessment: “photo elicitation mines deeper shafts into a deeper part of human consciousness than do words alone interviews” (2002:23).